Why EOS will overtake Ethereum in high performance smart contracts

I've always been a huge fan of Ethereum; however, it has some shortcomings, as recently made evident by CryptoKitties. In this blog post, I will introduce EOS and explain how it will solve many of Ethereum's current problems.

What is EOS and DPoS?

Similar to Ethereum, EOS is a blockchain platform supporting smart contracts. It differs from Ethereum mainly by its consensus algorithm: DPoS.

Ethereum blocks are generated just like Bitcoin in that it requires miners to compute hashes to compete in finding a block (proof of work). Similar to Bitcoin, there is a limit to how big a block can be, which allows for anyone to be able to run a full node.

EOS, on the other hand, uses nodes that are voted on called "block producers" which are in charge of processing transactions into blocks. There is no block size limit, and block producers can be massive datacenters processing many transactions in parallel. Due to this, not everyone is intended to be able to run a full node; however, the system has much greater performance as a result.

There are many problems with Ethereum in its current state that EOS has solutions for, which I will list some of below.

Ethereum can only handle ~23 transactions per second (TPS) on average. Larger transactions require more gas, so this could be even less. This is due to block size limits: larger blocks cannot be processed by all nodes, so Ethereum resorts to using smaller blocks in favor of decentralization.

Furthermore, the Ethereum block time is around 15 seconds, which will be reduced to around 5-7 seconds when PoS is introduced. Taking confirmations into account, this causes a lot of lag between performing a transaction and the transaction being recorded on chain. This prohibits many types of applications that require more real-time feedback, e.g. decentralized asset exchange.

EOS has a projected TPS of 100k/sec and a block time of 2 seconds on the testnet with a target time of 500ms on the mainnet. DPoS enables EOS to do things that the Ethereum network never will be able to do: higher TPS per node and lower block times, since all nodes are known.

In order for one to use a dApp, one must pay gas in order to perform an action. This requires people to buy Ether, which can be a barrier to entry for those that do not already have Ether. For example, if I decided to make a decentralized Wikipedia where every edit appended some sort of pointer to the blockchain, I would have to pay a fee in order to make my edit. Although the fee may be small, it is still a fee that needs to be dealt with.

However, with EOS, there are no such fees. The "fees" (which are not actually transaction fees, explained in next section) are paid by the dApp, so the user does not need to own any EOS in order to be able to use an application. This is great for having new, non-crypto people adopt the platform.

As someone with no knowledge of crypto other than the word "Bitcoin", would you rather register an account on Steemit just like you do on other websites and post your content just like you do on other websites, or would you rather download Metamask, buy Ether on Coinbase, transfer said Ether to your wallet 10 days after you bought it, and then pay a few cents to post your content, waiting 30 seconds before it shows up?

As an investor, it is generally better to own things that people will not want to sell. There is an analogy where Bitcoin is gold, Ethereum (Ether) is oil, and EOS is real estate.

Bitcoin is gold because you want to buy it once and keep it for a long time. There is no inherent value in it other than scarcity, as it is not even viable as a payments platform. Transaction fees are increasing dramatically.

Ether is oil because you use it to buy gas. If you ever need to execute a transaction on the Ethereum network, whether that is token transfer or contract execution, you must pay Ether for it.

EOS is real estate because it works in a completely different way from Bitcoin or Ethereum: token holders get a percentage of the bandwidth of the EOS network relative to their total share of the tokens. If EOS can handle 100k TPS and you hold 1% of tokens, you are reserved 1k TPS. The only cost to developing your dApp is purchasing tokens in the first place. Furthermore, if you are not a dApp developer, you can rent your stake in the network, allowing you to collect interest on your stake.

EOS encourages people to buy and hold their tokens-- not just for speculation, but because they need to in order to reserve network bandwidth.

Other less important but still notable factors include:

Now, EOS is not a complete upgrade over Ethereum. From the Ethereum wiki, Vitalik's scalability trilemma states that blockchain systems can only at most have two of the following three properties: decentralization, scalability, and security.

EOS is scalable and secure, but it sacrifices decentralization, which Vitalik defines as "the system being able to run in a scenario where each participant only has access to O(c) resources, ie. a regular laptop or small VPS". The question is: is decentralization really necessary? Is it really a core value of blockchain technology?

The Wikipedia definition of decentralization is quite different:

Decentralization is the process of distributing or dispersing functions, powers, people or things away from a central location or authority.

Note that Ethereum in its current state is much more centralized than Bitshares and Steem, both based on the same DPOS technology as EOS. 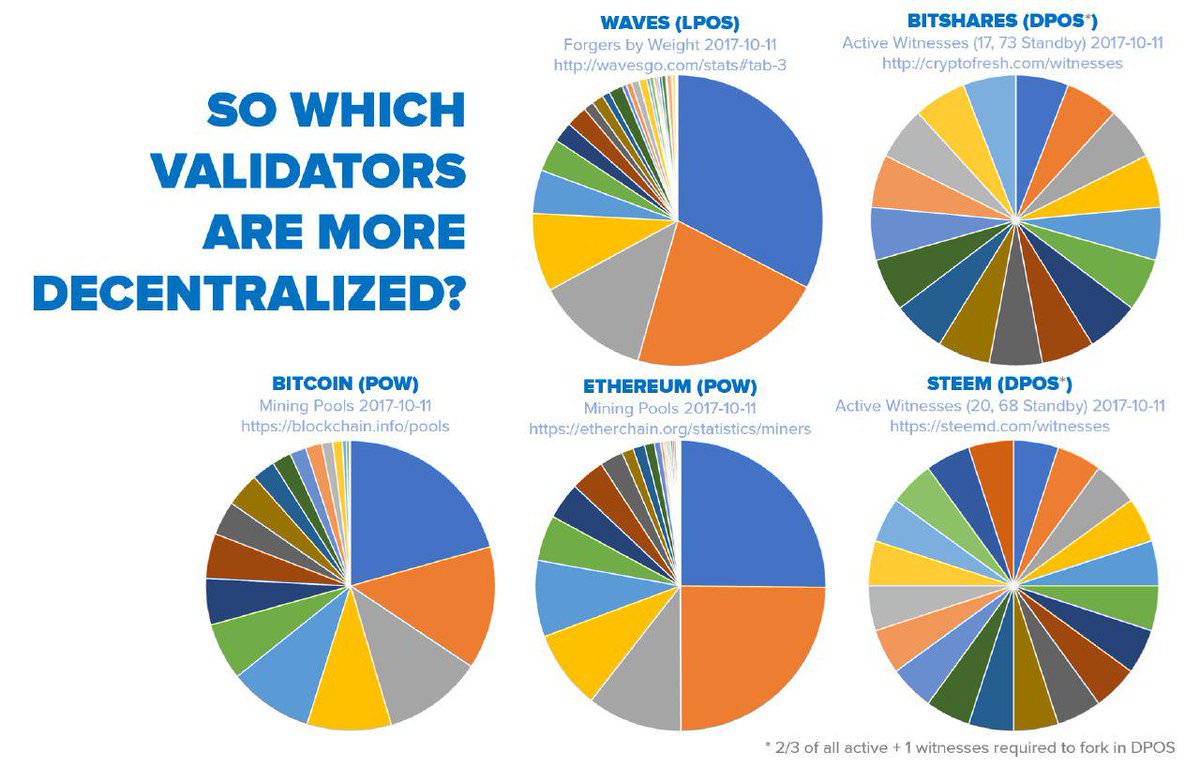 If you'd like to read the debate between Vitalik and Dan, see Vitalik's criticism and Dan's response.

There is also the looming factor that EOS may not deliver on its promises. Unlike most of the other major cryptocurrencies currently on the market, they do not have a mainnet deployed-- EOS is currently an ERC20 token that you can later redeem for "real" EOS in the future. Although the testnet is out, they have a way to go before building the 100K TPS platform they promised. Also, their ICO is uncapped, meaning that they are collecting as much money as they can for their ICO-- many consider this to be a "scammy" play.

However, the lead developer of EOS, Daniel Larimer, has built two other extremely successful DPOS platforms (Bitshares and Steem) with proven technology, and I am confident that he and his team will be able to execute on their vision, especially with $1B worth of funding.

Ethereum has its place

I believe Ethereum makes sense for things that do not require mainstream adoption and/or high TPS, i.e. as a "settlement layer". It is more decentralized than EOS and suited for things that need that.

Ethereum is aware of its performance problems, with Casper, Plasma, and sharding being solutions currently in the ideation phase. However, it will be a while before these are implemented in production. The real world performance of these solutions is currently unknown.

For applications such as social networks or Uber, I believe EOS will find significant traction due to its performance. DApp developers are already running into Ethereum performance bottlenecks. I believe average web users-- arguably a large portion of the market for dApp users-- are willing to tradeoff decentralization for usabilty, and they probably care more about the blockchain being public and auditable rather than it being forgeable on any random laptop.

If EOS can fulfill its promises before Ethereum can solve its scaling dilemma, EOS is likely to have a strong advantage in finding traction among common internet users, and thus overtake Ethereum in high performance smart contracts/dApps.

Thanks to Dylan Macalinao, Michael Huang, Tejas Manohar, and Justin Park for reading drafts of this.

(If you liked this post, join our crypto Discord!)

Thanks for reading! Have any questions, comments, or suggestions? Feel free to use the comment section below or email me at [email protected] and I'll do my best to respond.

Alternatively, you can view the source of the post here and send a pull request.